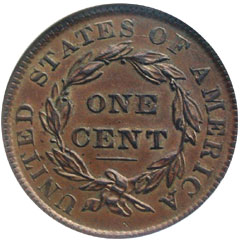 Like the previous type, Coronet Head Cents were struck out of pure copper, with a weight of 10.89 grams (168 grains) and diameter of approximately 29 mm. All pieces were struck with a plain edge.

Production quality became much more standardized during this series, although the careful examiner will still find plenty of weakly struck examples. Another problem with these early copper coins is the toning, which is often spotted and irregular. Full red examples are great rarities and sell for strong premiums when offered at public auction. As usual, cleaned and otherwise damaged examples should be avoided.

Identification of Proofs can be difficult, even for experts, as no true standards appear to have existed at the Mint. Generally speaking, a Proof tends to have reflective surfaces and a strong strike, although Proofs with some lightly struck points of the design also exist. What further complicates the matter is that many Proof dies were later used for production of cents for circulation. With all this taken into consideration, a fully struck and reflective proof Coronet Head Cent usually is a joy to behold, being among the first Proof coinage ever struck by the United States Mint.